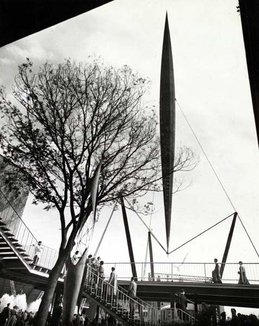 Skylon take their name from the sculpture which was constructed as part of the 1951 Festival of Britain.

The festival was a national exhibition that brought millions of visitors to the southbank of the Thames and was hailed as a "beacon for change" and look to a more optimistic future after years of rationing and depravation in the wake of World War II.

The design, by young architects Hidalgo Moya and Philip Powell, was chosen out of around 200 entries and their idea was to create a structure that would "float above the other constructions" and this was made even more gravity defying in appearance thanks to help from structural engineer Felix Samuely.

It stood 300ft tall and weighed 100 tonnes. There were aluminium louvres running up the central section which made a humming sound when it was windy.

At night Skylon was lit from within by hundreds of lightbulbs.

It was torn down at the end of the festival and sold for scrap to George Cohen and Sons Scrap Metal Dealers who made some of the fragments into commemorative items including paper knives and spoons.